The Ridge: Doubling Down on the Disco Acquisition Engine

The Ridge is a men’s lifestyle brand helping people streamline daily life through essential products, from wallets to key organizers to bags, that are both minimalist in design and high in function. 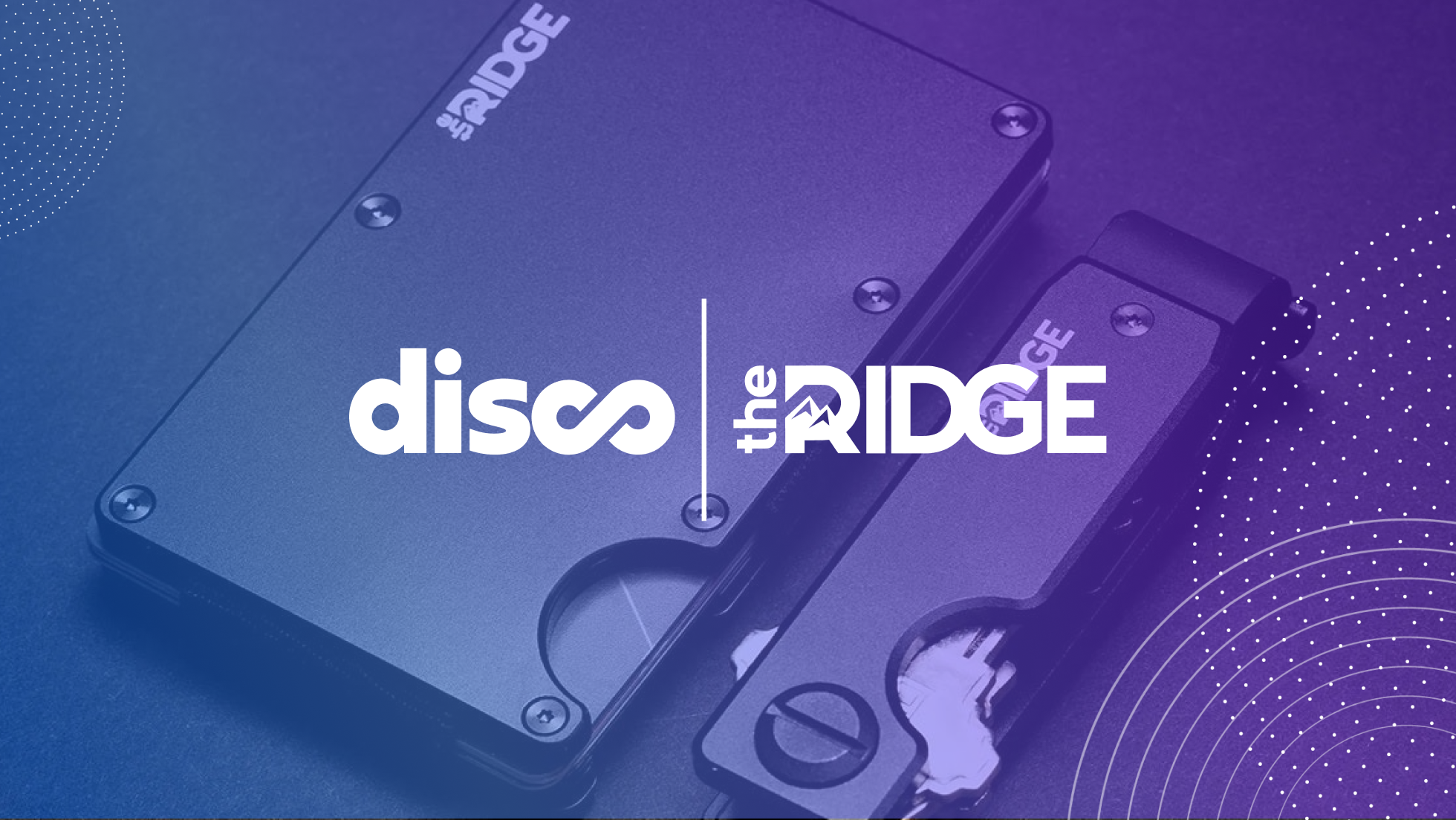 After launching on Kickstarter in 2013, the brand’s flagship Ridge Wallet now sits in the front pockets of over 2 million people across the globe.

We sat down with Connor MacDonald, CMO of The Ridge, to dive into how Disco supports the company’s long-standing ethos of diversified marketing channels. We dive deep on:

“All brands are collectively creating immense value, which can then be equitably and cyclically redistributed to one another. Disco has been of such high value for us in this way. Honestly, my only regret is not signing up for Disco earlier.”

In their early years, according to Connor, the exceptional product-market fit of the Ridge Wallet brought intense profitability, organic growth, and traction to the brand.

However, the Ridge Wallet is also guaranteed for life — meaning low repurchase rates and an emphasis on continually expanding The Ridge’s marketing mix for unique acquisitions.

For instance, The Ridge’s marketing teams boast a sizable budget for frequent experimentation with both traditional and unexplored channels and platforms, including growth avenues like:

On the other end of the user journey, Connor points to post-purchase flows, primarily for driving LTV, as another significant consideration for the Ridge team.

The Ridge Wallet, with an AOV of around $100, poses a legitimate investment for many customers, especially those who are accustomed to lower-end, generic wallets.

As a result, the Ridge team strives to upgrade post-purchase experiences in two respects:

Beyond these two avenues, Connor recounts early struggles in crafting great post-purchase experiences for buyers. Before Disco, The Ridge mainly presented barebones, “Thank you for your purchase” pages, with a post-purchase survey and options for package tracking.

It was, as Connor describes, likely an overly conservative UX for post-purchase, mainly because the team was determined to avoid seeming overly transactional or spammy. However, the potential to drive immediate conversions through that post-purchase was lost completely.

“The Ridge has really been built on having a diverse marketing mix, expanding and scaling within those channels, and then ensuring buyers actually feel great when using and about the product — after the fact of the purchase.”

The Untapped Potential of Brand Partnerships

Due to The Ridge’s long-time focus on a diverse mix of marketing channels, Connor had been familiar with the acquisition potential that came from leveraging other brands.

This eventually led to his discovering Disco through Twitter, as well as the platform’s communal, partnership-first approach to sustainable acquisitions and growth.

In his words, he was on board with Disco from day one.

After all, being able to access the active shoppers of similar DTC men’s brands was, for the marketing strategists behind The Ridge, the key to unlocking their perfect user.

“Having had such a focus on diversifying our marketing, I was acutely aware of how valuable other brands could be as one of those avenues to acquisition. That’s how I really came to believe in Disco’s vision of partnership-first growth.”

In Connor’s words, the post-transaction experience for a user is high-value real estate.

Before user tutorials, customer support, or even the package arriving on the buyer’s doorstep, recommending relevant and equally valuable products as a continued introduction to The Ridge as a premium brand was a touchpoint with large potential for ongoing conversions.

Through Disco, the Ridge site can now automatically (and accurately — which is more important to Connor) recommend and upsell the most attractive related products from the brand, whether that’s a premium bottle opener or an AirTag that’ll easily fit in your new Ridge Wallet.

In the vein of product recommendations that ace checks for reliability, relevance, as well as actual quality: Connor points to the fact that all of The Ridge’s partner brands within their Disco cohort are of a similar category, quality standard, and ethos.

In Connor’s words, Disco enables enormous confidence for his team for three reasons:

Social proof by association runs in both directions, with the ability to boost as well as ruin a user’s perception of a brand’s ultimate reputation and value.

An unexpected benefit of the Disco platform has been heightened data-driven insights into The Ridge buyers’ browsing and purchase patterns across other DTC brands in their category.

Connor had long predicted they shared an audience with notable brands in their vertical but had never had the data signals to affirm that theory until utilizing Disco.

As a result, the Disco platform has driven genuine connections and partnerships between The Ridge and other brands with whom they frequently trade user clicks and referrals, such as by:

Each brand emailed the other’s listserv to the tune of hundreds of thousands of customers — a great win for each brand, as Connor recounts, that led to continued email collaborations.

“Disco gives us the tools to position products as touchpoints for a new buyer to continue understanding The Ridge’s value as a brand. That’s critical since we think of post-transaction flows as the first page to our eventual retention efforts.”

Looking Forward: Doubling Down on Acquisition

In terms of future growth, Connor teased international and product line expansions — both of which will create further entry points for acquisitions — as well as continuing to drive down CACs through new Disco features that’ll facilitate high-value partnership efforts by:

Even more, rather than expanding to new channels, Connor anticipates The Ridge will continue pursuing meaningful scale, primarily by doubling down on their existing marketing toolkit.

This includes digging deeper to maximize ROI, on channels from Google non-branded search to linear TV ads, as well as diversifying efforts even further within a given channel, i.e. persona targeting TV viewers by applying various ad skews to various channel audiences.

“We’re positioning more of our ad spend towards Disco because we want to be that brand you consistently see recommended on other brands’ pages. It’s such valuable real estate and gets me so excited about Disco as a growth lever.” 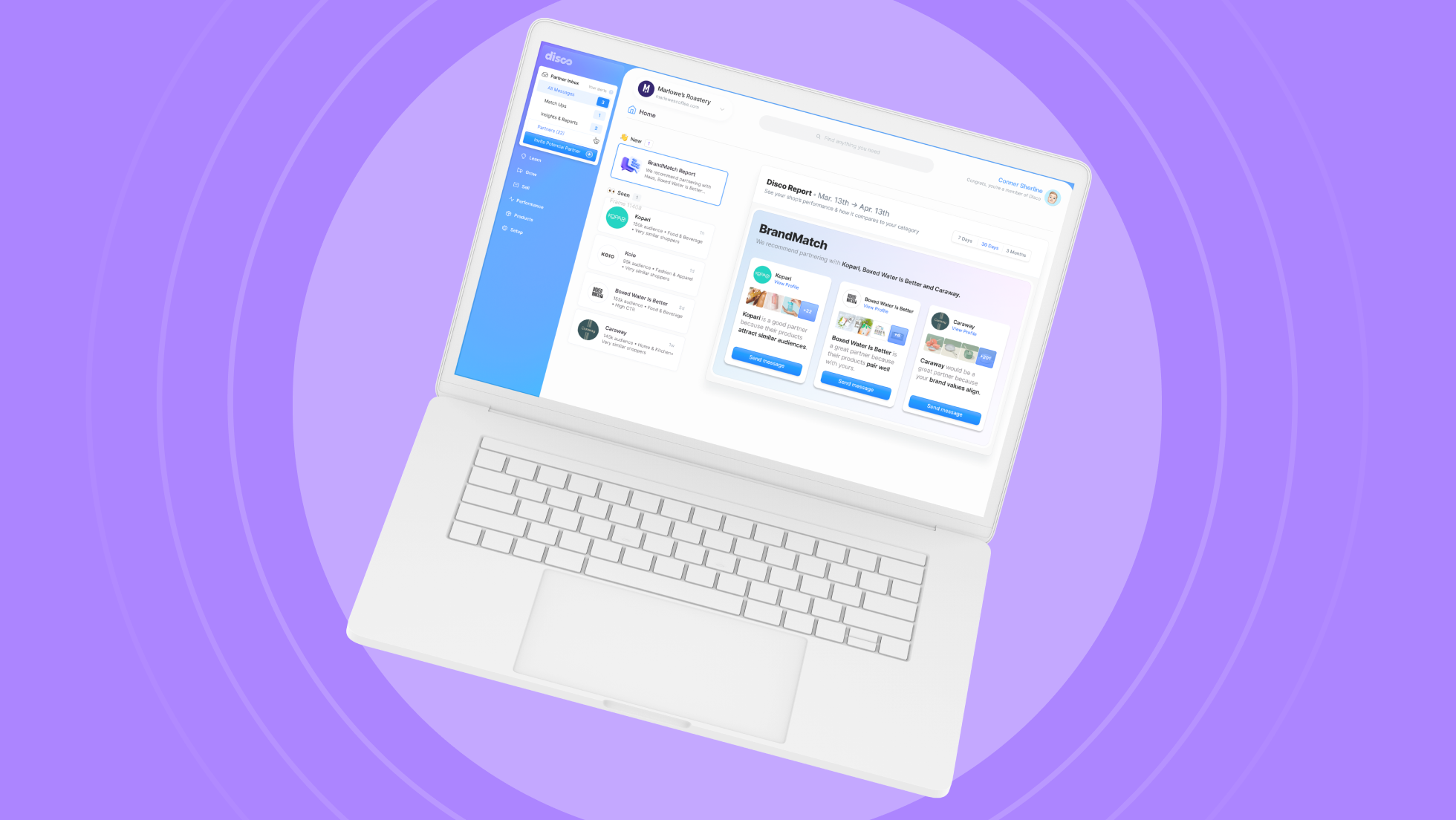